In a blog post at Jacket2, Al Filreis talks about his obsession with John Ashbery’s “Some Trees” and uses a passage from my book Beautiful Enemies to support the hypothesis that the poem is actually a love poem for Frank O’Hara. 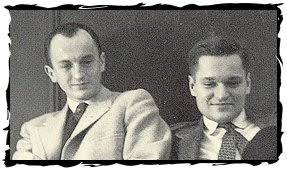 The idea that Ashbery’s reference to “accents” in the poem’s last lines may have something to do with the nasal twang Ashbery felt he shared with O’Hara is tantalizing.  However, I think it’s unlikely that “Some Trees” is a love poem about O’Hara — not least because their relationship was, by all accounts, not a romantic one, but rather a close platonic friendship from beginning to end.  But who knows?  They were young and reckless and still in college at the time!  As I argue in the book, Ashbery spent a lot of time writing in subtle and oblique ways about his relationship with O’Hara, so I for one support this line of argument!
Advertisement

My review of Something Understood: Essays and Poetry for Helen Vendler, edited by Stephen Burt and Nick Halpern, has recently been published in the current issue of Modern Philology (February 2013). Here’s a link, although I believe you need an academic library subscription to access it, alas: